It's a New Year! Our annual Hawaiian holiday of Mai Tais & chocolate covered mac nuts gluttony, as all great things, must also come to an end. That, and the countdown to Boston Marathon has now started. We just booked our hotel - hooray! This will be Christy's first Boston (she was pregnant when I went before) and we are running it together with my sister-in law-Val and good friend Arma.
Despite the extreme cold temps and snow up here, I've dived right back into winter training this week. I have been doing my mid week shorter runs on the treadmill and did one hill workout outside and a long run. With all the snow & freezing cold, it's better for me to do my quality workouts on a treadmill. I even started a great new evening yoga class that I think is going to be awesome for core strength and some much needed stretching in my injury-prone areas.
Today, being Saturday, is long run day for me. Val and I planned to meet at my house at 6:30 a.m. and run the lakeshore trail and back (it's about 9 miles or so round trip from my place). When she suggested the time, I shuddered knowing it was going to be cuh-cuh-cold at that time (my run the day before in the afternoon was -15 or so and it was sunny!). I agreed to the ungodly early running time quickly accepting the fact that it would be better to be freezing in the company of Val than almost as freezing a bit later......alone. Well 6:30 a.m. came and went and no Val, than 6:35...6:40 - still no Val. I could hear baby bear stirring upstairs in his crib so I figured I had better make my getaway while the getting was good. I sent Val a quick (where the heck are you) text message & told her that I was sticking to our original plans and out the door I went.
It was peaceful out, there was a huge golden full moon in the sky that illuminated the snowy surroundings almost as bright as if it were daylight. It was FREEZING - luckily there wasn't a lot of wind, it was a still morning (no wind chill thankfully). I realized after I had started out, that I forgot to position my headphones in my ears under my beanie and turn on my ipod. I decided it would be better not to take my hands out of the mittens at that time to put my headphones on since it was that cold. I made a mental note that I'd wait until I warmed up to bare the little paws for a second and turn on my ipod. Off I went toward the frozen lakeshore to the sound of only my breath and the extra crunchy sound of my footfalls on the snow covered road. I could tell by the oddly crunchier sound my feet made on the snow/ground that I was in for an extra cold run today. As I arrived on the lakeshore trail a few miles into the run I was surprised by a full view of a huge gold full moon still hanging low over the sky - it was so picturesque I was cursing myself for not bringing along my bberry so I could have snapped a photo. It was out of this world - a huge orange (harvest-like) full moon hanging what seemed like inches over the frozen lake - a sea of nothing but white snow covered ice. I was the only person out there (not even the ice fisherman were out this morning that early!). I soaked up the sight and trudged along catching myself from slipping in a huge ice patch...whew - close call.
I realized I didn't seem to be warming up as I normally do by this point in a wintery run. I kept wiggling my fingers in my mittens to make sure they were unfrozen. I passed another crazy runner and then another - I wasn't the only die hard out there! I made it to the turnaround point at the end of the plowed lakeshore path and stopped just long enough to quickly pull my ipod out of my pocket, position the earbuds and be back on my way. I was now sweat soaked and feeling even colder and slightly worried about the return trek home. I passed the same 3 die hard runners on the way back and was alarmed at their ice covered eyebrows, eyes, etc. Wow - I wonder if I look like that I thought...now feeling even colder...I looked down to find my garmin had frozen and was no longer working. For some reason the return trip around the lake was colder running in this direction. As I approached the last mile from home, I recognized a silver suv that pulled up next to me - it was the hubby & baby bear! He was worried about my running in the sub zero temps alone and went out looking for me. I gave him the thumbs up as he drove by. He stopped to snap a few snapshots of me and then trolled along next to me the rest of the way home. I climbed in the car as we rounded the corner to our driveway and off to Timmy's we went. I've never been so happy to see a Tim Horton's large milk & sugar! Check out the photos from this morning - take note of the 'ice mascara" and the white fluffy stuff on either side of my head - that's my hair FROZEN! I was worried that it might snap! Could you imagine?! All of a sudden the treadmill's not looking so bad now....oh yeah - it was 27 below (c). 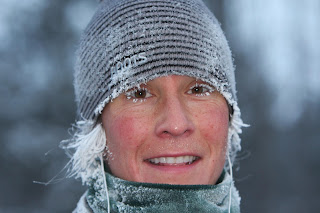 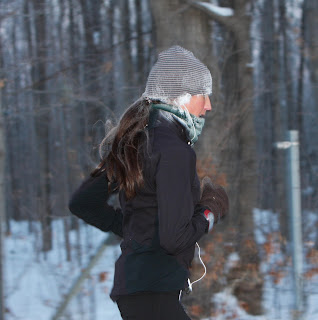 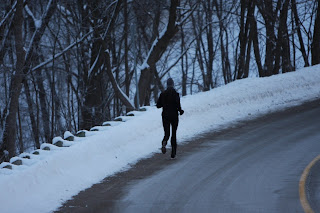 Email ThisBlogThis!Share to TwitterShare to FacebookShare to Pinterest
Labels: Running Below Freezing

Crazy crazy crazy...
and I thought +27 degrees was cold :-) And I had no idea a Garmin could freeze like that.

Wow! I have had that happen to me only once - when we went dog sledding in the temps you were running in. I can't complain about my pre-snowstorm run yesterday then! :o)

Are you guys going to be exhibiting in Boston? Can you let us know the details on the blog when it gets closer?

Brrrrrrrrrrrr...man what a change from the warmth of Hawaii!

Just looking at those pics makes me cold. Anything below 50 is cold for my California native body.

Upcoming Races - Check out the Skirtique