Disneyland Half Marathon - This One's for Dad!

Yippy!  The Happiest Race Weekend on Earth (on the west coast that is) was finally upon us!  After a miserable hot & not so great race at AFC last week, we were looking forward to a little fun at one of our favorite events The Disneyland Half marathon.  Christy & I love working this expo!  It was great to see all a lot of our skirthusiasts and catch up!   Christy &  I have participated in every Disneyland event since it started - it's by far one of our most favorite traditions & after a long tough summer (more on this later) we were ready for some much overdue fun!

The expo did not disappoint!  The running skirts booth was rockin busy the whole weekend as we sold out of our red & white polka dot running skirts, sporty dresses, run buns and strappy tanks...the go-to "uniform" for every event RunDisney!  Thanks goodness Sandi from BIC Bands stopped by after picking up her own race entry, her help came at just the right time.  The sparkle BIC bands were selling out quickly! We were lucky to have the assistance of Neilly this year in our Skirtique thank goodness, as this year seemed busier than ever, but we packed up and were out of there in record time.  We quickly returned to our hotel, ordered the traditional pre-race meal ( fish, rice and veggies) and got the ice bath preparations underway.  Much to our disappointment, we didn't quite talk Neily into having one (not as easily convinced as Michelle last year)


After a long hot weekend, the ice bath actually felt really good this time...for a few seconds.  Luckily the kiddos were home Dad and Grandma so it was a quick soak, dinner and then off to bed for a solid night's sleep as the alarm was set for 04:00am or something ridiculous like that.  Disney events are infamous for starting at o-dark-thirty (probably because they run through the park before business hours).


We managed to rise when are alarms went off, quickly shower, dress in the disney race "runiform" minidot running skirt, black strappy top, new striped compression socks, sparkly BIC bands and mouse "bun" ears and off we went on a warm up jog to the race start.  No matter how early we get it it always seems like we just get to bag check, through the crowds and to the start line just in the nick of time for the gun to go off.  We were all in Corral A so we were able to catch Rudy doing what he does best and see the entertainers in the start area.  Because of my top (old lady) finish last year, I was lucky enough to have been issued an "elite" bib (ooh lala - as if i'm really elite - hahah) so I was able to do a nice little warm up and some strides.   I remember thinking - oh these people think I'm an elite runner, they will be pretty disappointed.  After working the long 12 hour expo days and after the poor AFC performance, I didn't really have any great expectations other than to do my best and have some fun on this great course.

In what seemed like minutes after we got to the start line, the gun was going off and off we went.  Initially I was running behind another women (strikingly similar in appearance to the women who finished right in front of me last year).  We set out at a pretty fast pace and I immediately dropped back slightly behind her in an attempt to stick with my race plan (go out no faster than goal race pace).  After a few 100 meters she abruptly put on the brakes and dropped back.  The first part of the race is interesting as it is just before dawn and you get to run through the park.  My legs were feeling the typical "expo legs" syndrome and I was pleasantly distracted by all the sights and characters as I ran through the park.  The new Cars Land was a highlight as it reminded me of my boys and how much they were looking forward to checking out the new attraction.  Christy always teases me because I never seem to see all the cool sights and characters, course attractions when I run, so I was making a point to try to soak it all in.  I do recall the funny Toy Story army men and their clever comments.

While I was in the park I started to hear cheers "hooray - first minnie mouse" and then great job - first women.  I had no idea that I was in the absolute lead and had a lot of doubt that it could possibly be true.  The next  thing I noticed was that I was being trailed by 2 bikes...it took a few minutes to sink in that they were riding with me.  I thought to myself, wow - this is cool, wonder how long it will last before I get passed.  I watched my garmin and made sure I was staying within my planned pace zone...sort off.   I said a quick prayer and wondered if Dad was enjoying this from his view in heaven.  (We lost our father a few weeks prior).   As we left the park and hit the streets of Anaheim, I tried to settle in and run my race plan.  As we passed each mile marker one of my cyclists would radio in the split "Mile 3 19:35 Big Number 1-8". I wondered if they were announcing or the hubby at the finish area knew I was in the lead and knew he would be so nervous and even more proud if I could hold onto this lead.  Seeing skirthusiast Stephanie around mile 4 or so was the best - her cheers, photos and "I love you" definitely put a spring in my step!  The cheers "go skirt lady", "great job runningskirts" and more kept me going and were so awesome!

By halfway into the race, I was feeling really good.  We were lucky to have a bit cooler weather and it looked like it was going to be sun-free for the most part.  I ran a few miles with a nice man who shared a few words of encouragement  "Hang in there, don't run faster than your comfort zone" or something to that effect.  I pondered his remark for a while, chuckling to myself thinking "If I'm going to hold this lead, I'm definitely not going to be within my comfort zone".  It gave me something to think about as the miles clicked by one cheerleading troop after another (wow is the course entertainment getting better and better each year!) As I passed each mile, I wondered how Christy & Neily were feeling and knew there were probably not too far behind me. Christy is training for her first 50k race and wasn't planning on racing today, but I knew she was probably feeling pretty good to after all the hard training she's been doing.  I kept waiting to be approached by another female and tried to stay relaxed and save a little energy for any chase that may be coming.

Miles 7,8,9 went by pretty quickly but I was getting tired.  Nothing like hundreds of girl & boy scouts cheering madly while you get to run through Anaheim stadium to pick up the energy levels.  I was so excited to still be in the lead and feeling ok that I made a point to slap as many cute little hands as I could as I made my way around the bases and out through the exit of the stadium.  As I left the building, I was really starting to feel tired and listened carefully for any announcements or clues as to how far back the next woman was.  Still feeling good, I realized that my dad was definitely in on this one and he was with me every step of the way.  "This one is for you dad" I said when it really started to hurt a bit.  Just thinking of the pain he endured through his last days and how strong of a fighter he was was enough of a "kick in the skirt" to keep me going on pace.  Miles 10, 11, and 12 were tough but another female never approached or passed me.  I was starting to get really really excited as I absorbed that I might actually win this race and was also starting to get a bit nervous that I might actually get passed.  Don't get me wrong, there was significant self-pep talking going on...."How angry will you be if you led the race this whole time, only to get passed so close to the finish".

I will never ever forget the final mile of this race. Yes, it was a sweet victory for myself, but it was also a victory for Christy, for my hubby, for my Dad and for Running Skirts (real runners do run in skirts!).  It was impossible to hold back the tears of joy that last mile and my huge permagrin as I made my way to the final stretch.  A few hundred meters out, I could hear Rudy already.  His special shout out was so touching and just the icing on top of this whole delicious race.  "She's worked so hard for this!" I heard as I watched them stretch the tap across the finish line and the next thing I knew confetti was flying.  I gave myself a little "woohoo" cheer and heard a familiar voice screaming my name with excitment.

You can watch this video clip to see it all go down round :50 seconds into this youtube clip!

This one's for your Dad! 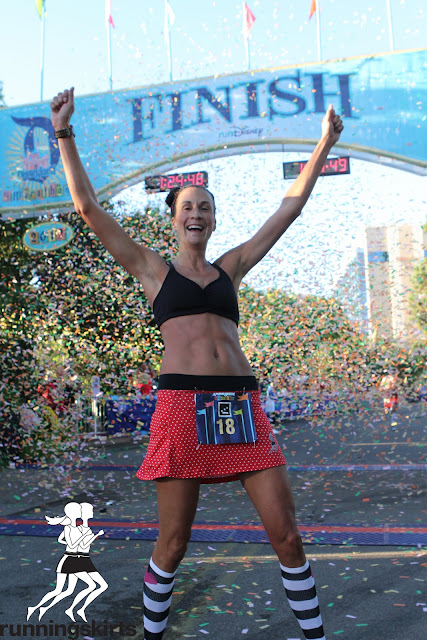 I don't know who was more surprised & happy to see me break that tape....me or the hubby!? 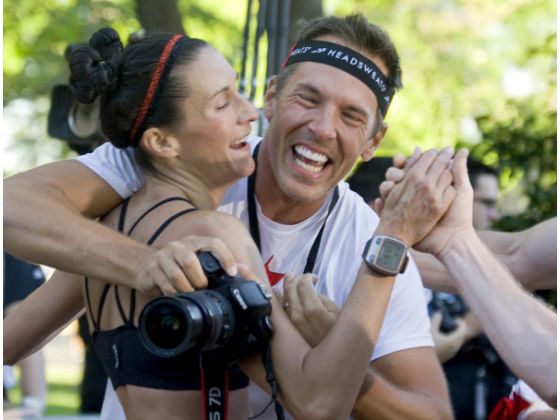 This if my favorite photo of the day - when Rudy announced to Christy in the final stretch "Christy, guess what Cindy just did????" 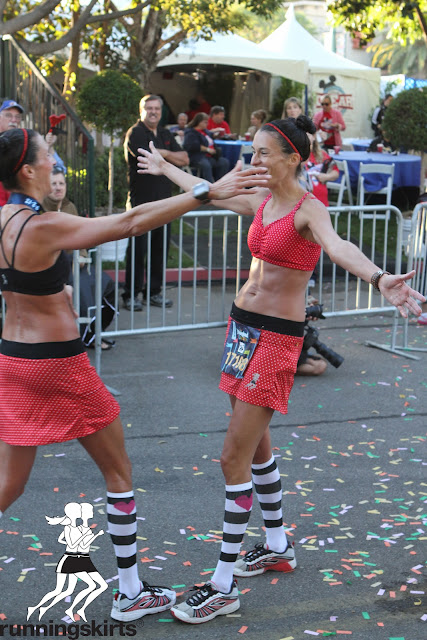 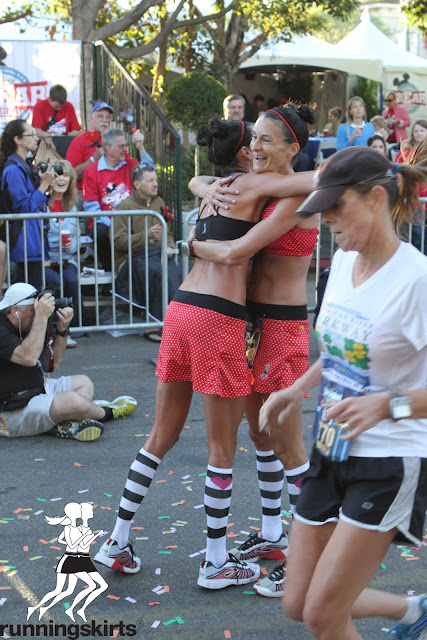 The coveted "mickey" trophy....and a kiss! 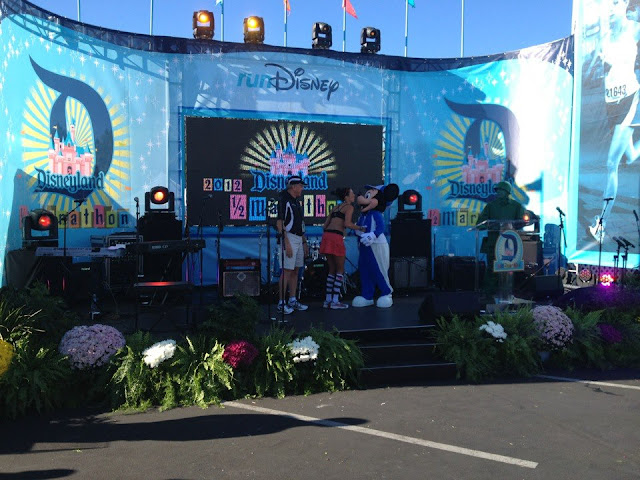 Oh what a day!  Congrats to all the finishers in this amazing race.  We'll see you next year!
This is now one of my favorite "lucky skirts" it's brought me 2 half marathon victories now!  (One in Toronto a few years back and now here!).  You too can get a lucky "mini-dot" running skirt here! 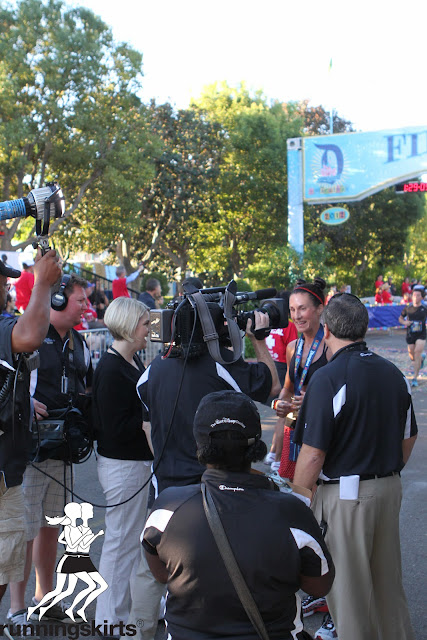 Special thanks to all the volunteers and the crew at Run Disney for putting on such a fabulous event...The Happiest Race on Earth!

Upcoming Races - Check out the Skirtique